Click on image to view info. * Contact us to inquire about a piece. Ask us for gallery images of it! 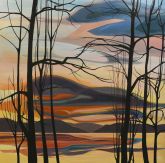 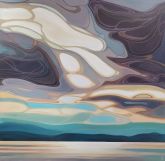 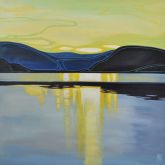 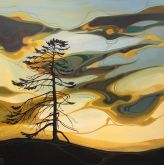 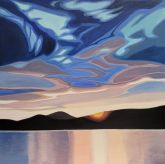 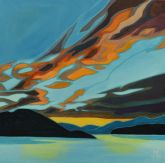 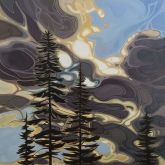 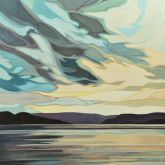 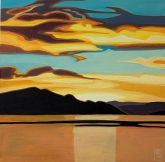 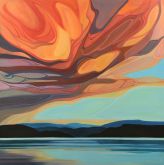 Erica was born in 1975 and grew up in the countryside of a small city in British Columbia surrounded by trees and bird song, quiet starry nights filled with northern lights and peaceful snowfall. Erica had a great deal of alone time inspired by her environment and this has helped to mold the art she makes today. Today, Erica lives in the Beautiful Okanagan Valley in BC with her husband and two children.

Over the years Erica has been most inspired by the Art Nouveau movement of the turn of the century genre artists and one can catch glimpses of the curved decorative lines inspired by natural forms and structures. According to the philosophy of the style, art should be a way of life. Art Nouveau acted as a transition between the eclectic historic revival styles of the 19th-century and the Modernist style which rejected the more traditional forms of art. Besides Art Nouveau, Erica is also inspired by the Group of Seven, El Greco and Japanese minimalism.

Recently, Erica has emerged into the gallery scene with two distinct styles one she has coined, "Cubist Impressionism" and the second is called "Nouveau 7", both of which she hopes will lend credit to the varied teachers and styles she is so taken with. She has been awarded finalist landscape placement in 2015 and 2016 for both styles, with follow up articles in Southwest art magazine.

"I strive to paint each picture with a life of its own. I want my art to be memorable and beautiful. Art that is accessible, recognizable and has a modern twist."

Erica recently entered a contest and found that her painting on the left entitled "Evening Shades" was one of the finalists out of 6500 entries! She was chosen to be published in the Jan. 2015 issue of Southwest Art Magazine and was very pleased to find her painting printed twice in the magazine, as artist profile and also is an 'exciting find' in the editor's blog.  Fans of her art can also read a fabulous article in the 2016 Summer edition of Arabella Magazine: http://www.arabelladesign.com/magazine_Summer2016/Erica_Hawkes/Erica_Hawkes.html